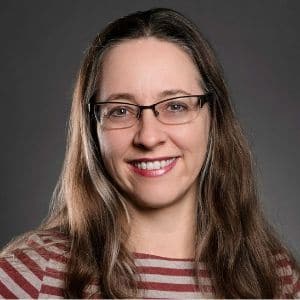 Claudia Vickers, Director of the CSIRO Synthetic Biology Future Science Platform at CSIRO and Group Leader in the Australian Institute for Bioengineering and Nanotechnology at The University of Queensland.

A/Professor Vickers holds dual roles as Director of the CSIRO Synthetic Biology Future Science Platform at CSIRO and Group Leader in the Australian Institute for Bioengineering and Nanotechnology at The University of Queensland (UQ). She completed her PhD in cereal crop biotechnology at CSIRO Plant Industry and UQ in 2004. She held post-doctoral and Visiting Scientist positions at Essex and Lancaster Universities in the UK 2004-2007, where she worked on abiotic stress and the metabolic regulation and physiological function of volatile isoprenoids in plants. She returned to UQ in 2007, joining the Australian Institute for Bioengineering and Nanotechnology to expand her research into microbial metabolic engineering. Since then she has headed a group focused understanding metabolic regulation and physiology of isoprenoids, and on converting agricultural biomass to industrially-useful biochemicals using advanced synthetic and systems biology approaches. Target compounds sit in the isoprenoid group of natural products, and include jet fuel, plant hormones for agricultural applications, food additives (flavours, colours, etc.), fragrances, and pharmaceuticals. Since January 2017 A/Professor Vickers has held a joint appointment with the Commonwealth Science and Industry Research Organisation (CSIRO) to lead the CSIRO Synthetic Biology Future Science Platform (SynBioFSP), a $60 M research and development program aimed at expanding Australia’s capability in synthetic biology. She is also on the Executive of Synthetic Biology Australia as Immediate Past President.

Dr Vickers has worked with industry partners in a range of application areas to provide consulting expertise and deliver industry-focused outcomes. She has also acted as an advisor on synthetic biology and industrial biotechnology for the Australian Federal Government, the Queensland Government, and the Institute on Science for Global Policy. She has won numerous awards and Fellowships, including a Queensland Government Smart State Fellowship (2010), the University of Queensland Foundation Research Excellence Award (2013), a Queensland Government Accelerate Fellowship (2014), and a Young Tall Poppy Science Award (Australian Institute of Policy & Science; 2014). She has been working to develop and support synthetic biology across Australia and New Zealand for several years. Follow her on Twitter @claudiaevickers